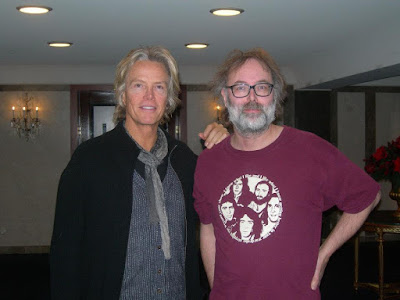 Whatâ€™s it like to play bass with the most famous bass player in the world? Anders Lundquist hooked up with Brian Ray to ask him. For ten years, the American guitarist, bassist, and singer has toured with Sir Paul McCartney.
Brian Ray: â€Donâ€™t be mistaken: Paul is the bass player of the band. But I do get to play his bass lines when he plays piano or guitar. Iâ€™m the stunt player. Itâ€™s an apprenticeship thatâ€™s been going on for a decade now.â€
Anders Lundquist for Singing Bassist: The story of how Brian Ray got the Paul McCartney gig is one which requires a brief history. Brian started out as Etta Jamesâ€™ musical director for 14 years, including opening for The Rolling Stones on their classic Some Girls Tour in 1978 (at the age of 24). He also played with others, when Etta wasnâ€™t touring. After having stopped played with Etta James, he continued to tour with several other big acts, including some of Franceâ€™s biggest artists, and record with artists like Willy DeVille. He started to get used to making a lot.
BR: And the burn rate of spending money starts to increase when youâ€™re make more. You start to spend it like youâ€™ll always make money like that. So thatâ€™s a lesson for all of us, he laughs.
Things were slow for Brian in 2000-2001. After having prayed for some kind of sign, he was offered to go on the road with superstar Shakira.

BR: In addition to my salary I asked for business class air, because Shakira travels very far: South America, Europe â€“ all over the place. I didnâ€™t ask for first class, but business class was my bottom line. And they wouldnâ€™t give it to me. In fact, they gave the job to someone else, who accepted economy class, without even getting back to me.
This was around 9/11. Brian was sad, and very hard on himself.
BR: I was saying to myself â€Brian, you just passed on what could be two years of great work, for business class plane seats. Isnâ€™t that crazy?â€.
While licking his wounds, he started thinking of other options. Wasnâ€™t his buddies Abe Laboriel Jr and Rusty Anderson playing with Paul McCartney?
BR: I had this quiet thought to myself, but I didnâ€™t tell anybody. And sure enough: in January, Abe was at my birthday party. I asked him if they were going to tour. He said â€yeah, weâ€™re gonna get together to prepare for a tour soonâ€. I asked him if they were looking for somebody to play bass when Paul plays guitar and piano, and guitar when he plays bass. And Abe said that they did. I told him that Iâ€™d love a shot at that. Abe put my name forward, Paul liked what he saw and what he heard, and here I am â€“ ten years later â€“ still playing with Paul! In the end it was right to have some kind of value, and believe in yourself. I had a little bit of faith that I could get a shot at something better. And it worked out.

SB: Are you self-taught?
BR: Yes, Iâ€™m a self-taught blues/rock player. There are a lot of people who have a lot more experience in school playing. But I have a lot of experience playing live, recording, writing and producing.
SB: Which, incidentally, is the same background as Paulâ€™s â€¦
BR: Exactly. In fact, he was moved by the same stuff that I was moved by, except for his fatherâ€™s roots in show tunes, vaudeville and English music hall. All that great stuff. That wasnâ€™t in my blood stream. But, just like John Lennon, we both loved Little Richard, Jerry Lee Lewis, Eddie Cochran, and The Everly Brothers. Thatâ€™s what I gravitated to, as a kid.
SB: Youâ€™re mainly a guitarist. How did you learn to play the bass?
BR: By playing a lot of bass on my own demos.
SB: Did you feel you have to be in a different frame of mind playing the bass and singing, compared to playing the guitar and singing?
BR: I always appreciated that bassists are of a different breed. The let the details and the noise fall off their shoulders and have to stay centered. Iâ€™ve always appreciated that role. And Iâ€™ve never enjoyed when most guitarists play the bass, because they just play it like a guitar. To me, it was a fine challenge to learn this from a bass â€head spaceâ€ perspective.
SB: How would you decribe Paulâ€™s bass playing?
BR: He plays the most magnificent, graceful, musical â€“ and still very soulful â€“ bass lines. I donâ€™t know how he does it. He plays counterpoint melodies to his great vocal lines with great feel, and itâ€™s very effortless and soulful. Itâ€™s not like heâ€™s seen the melody on paper and written counterpint, itâ€™s just come out of him. Itâ€™s remarkable.
SB: Paulâ€™s songs demand that everybody sings a lot. In the beginning, did you have problems playing bass and singing at the same time?
BR: Sure. Not problems, but rather challenges. There are things that are difficult, it is a bit like rubbing your belly and patting your head. 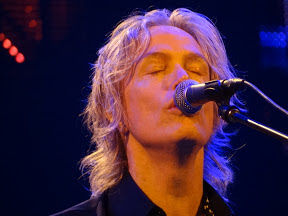 SB: How did you learn?
BR: You practice it. Over and over again. You go â€damn!, slow it down and you do it again, and you go â€damn itâ€ and you do it again, and gradually, you speed it up doing it. And in the end youâ€™re not even thinking about it. When you slow it down you can take note of the details. Like if the vocal is on the up beat and the bass is on the down beat. If you can identify, and make a note of that little moment â€“ where it differs â€“ and practice that, it makes an anchor that you have to get used to. If you go for the sticky ones, the tough ones, and get them down, the rest is easy. Just face them head on, stare â€™em down and wrestle them.
SB: You play the Gibson SG bass 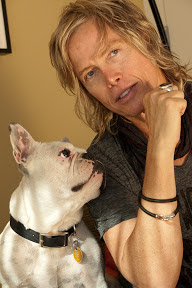