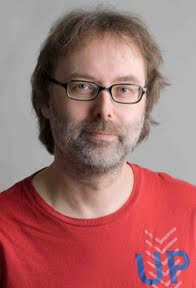 Anders is a professional music journalist based in Stockholm. He contributed this interview with Glenn Hughes, and now sits on the other side of the recorder for this interview.

SingingBassist: What was the first musical instrument you played?
Anders Lundquist: A cheap, acoustic nylon string guitar that was actually my younger sisterâ€™s. This was in 1977. She took guitar lessons, I didnâ€™t. When I teased her by learning her homework quicker than she did, she quit. I still feel guilty about that. I actually took over the guitar, and kept using it when writing songs for the next 30 years. Like Neil Young, I think you need an instrument that feels like a friend to be able to relax. Unfortunately, it broke and Iâ€™m still looking for an acoustic guitar that gives me the same vibe.
SB: When did you first pick up a bass guitar?
AL: In 1980/81, when Peder, the bass player of our band MaxiballÃ©s, left us for a cooler band. Until then weâ€™d had the classic line-up of two guitars, bass, and drums. Since the other guitarist, ThorbjÃ¶rn, was a superior guitar player, I switched to bass. I soon dicovered that I actually enjoyed it more, and had a pretty good rhythmic feel. I learned to appreciate the telepathic understanding you sometimes develop with a drummer. For the next band, Why Me (also a trio), that actually happened. Johan and I did the same things at the same time without ever having discussed it beforehand. Thatâ€™s a great feeling. We were very much influenced by bands like Genesis, Camel, and Rush â€“ and later U2.
SB: Do you prefer fingers or pick and why?
AL: I canâ€™t say I â€preferâ€ pick, itâ€™s more that I never learned to play with my fingers properly. This is why I still feel like a â€fakeâ€ bass player sometimes. Although some of the most famous players in the world use a pick, so I guess Iâ€™m in good company! As a listener, I find bass players who use their fingers and really knows their stuff a joy to listen to.
SB: Who are your favorite singing bassists?
AL: There are so many. In no particular order: Paul McCartney, Chris Squire, Jack Bruce, Geddy Lee, Gail Anne Dorsey, Colin Bass, Colin Moulding, Sting, Kasim Sulton, and Glenn Hughes. For bassists who do great backing vocals, Graham Maby deserves a honorable mention. Also, I always admired Phil Lynott as a writer/singer who also played bass. Even though his bass playing never really stood out, he always did what was right for the song. Which is more than you can say about some of the â€monster playersâ€ out there. Also, even though some people may find this hard to believe, I think that Gene Simmons is an underrated bass player.
SB: In what types of bands have you played?
AL: New wave, power pop, rock, and progressive rock. Iâ€™m not good enough to approach jazz or fusion, although I actually played in a band together with a true virtuoso, Morgan Ã…gren (Google him) in my teens. I played guitar in that band. Unfortunately â€“ for me â€“ he developed at a pace that mere mortals like me just couldnâ€™t keep up with. At the age of 15, he was already way too good. I donâ€™t think itâ€™s a coincidence that it was that same year I decided to become a writer instead, and remain a hobby musician. Last year, Morgan was voted best fusion drummer in the world by the readers of Modern Drummer Magazine, which kind of proves my point.
SB: Which song posed the greatest difficulty for you to sing and play, and why?
AL: Some Joe Jackson songs were challenging â€“ I had to sing Joeâ€™s parts and play Graham Mabyâ€™s. But most of the bands I was in mainly wrote original songs, so I never really had to learn anything that was too difficult. Iâ€™d say the most complicated song I ever performed as a bass player was YYZ by Rush. Luckily, itâ€™s an instrumental!
SB: Anything else?
AL: My favorite bass to play is Fender Jazz, but I canâ€™t get enough of the sound of a Rickenbacker. I own a Rickenbacker 4001 from 1978 that I bought in a pawn shop in Toronto, hoping that it once used to belong to Geddy Lee. The Fender is like a grand piano â€“ itâ€™s natural. The Rick is a completely different animal. Rickenbacker basses is like the movie stars who just donâ€™t work in supporting roles, because they have too much charisma. The Rickenbacker takes over. Itâ€™s the revenge of the guitarist who had to switch to bass. Hmmmâ€¦that sounds familiarâ€¦

Many thanks to Anders for this discussion. We look forward to more of his insight and interviews in the future. If you can read Swedish, check out the music website for which he is a contributor: www.obladoo.se