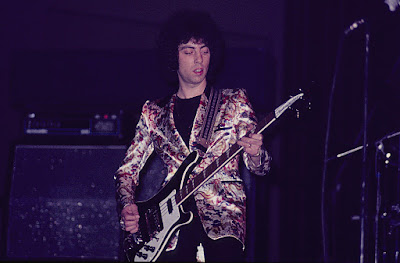 65-year-old Graham Gouldman has played in bands for more than a half century. He started out playing in different beat bands in his hometown of Manchester, England. At the age of 17, he penned hits for big names like The Hollies, The Yardbirds, and Hermanâ€™s Hermits. But it was with the 1973 release of 10ccâ€™s first album that he became a household name, as one quarter of the british super group. While every member of the band was a multi-instrumentalist, Gouldmanâ€™s main thing was always singing and playing bass. At the same time. Which means that heâ€™s not very surprised when SingingBassist.com asks for an interview.

Graham Gouldman is not one for resting on his laurels. When 10cc had three months off from touring, he recorded a new solo album, Love & Work

, which was released in 2012. He also occasionally writes with formerd 10cc colleague Kevin Godley for an upcomingfuture release. With 10cc, Gouldman has played together with famous session players like Steve Gadd, Jeff Porcaro, and Simon Phillips. But Paul Burgess, whoâ€™s played with 10cc since 1973, first as additional drummer, and since 1977 their main drummer, remains one of Grahamâ€™s favourites to this day. â€Paul is rock solid, very reliable, and very tasteful. No ego. His playing reflects his personality. In fact, I sometimes encourage him to do moreâ€, Gouldman smiles.
Singing Bassist: Did you start out as a bassist?
â€“ No I started with the guitar, like everybody else! And I started playing the bass out of necessity. I had a Revox tape recorder, and I could bounce tracks so I wanted to make demos. On the first track I put the guitar and vocal. On track two I added bass. And on the third track I added tambourine, or maybe a harmony vocal. I started playing in different bands in the early 60â€™s, and it was around that time I started making demos.
SB: Did you encounter problems singing and playing at the same time?
â€“ The only time that happened was when we recorded something, and then decided to do it on stage. Sometimes the bass parts were very complicated and you had to divide your head from your hands. But itâ€™s possible, all you need to is practice. I never had a formula or recipe for it. All I know is that if you play and play and play, it gets ingrained. The same thing actually goes for lyrics. Some people have the lyrics on stage, and then they always rely on the piece of paper or tele prompter. But if you take it away, youâ€™ve GOT to do it . Thereâ€™s kind of a life lesson there as well, ha ha.
SB: Did you take music lessons?
â€“ No. I know people who are really good players, but they can only play if they have the music in front of them. And that, to me, is missing the whole joy of music. Itâ€™s nice be able to sight- read, of course. But to improvise, be able to bounce ideas back and forth, and be able to reach a (state of) flow â€“ like in jazz or whatever you want to call it â€“ is a fantastic thing.
SB: In the 70â€™s, you always played a Rickenbacker 4001, and your solo on Feel The Benefit was one of the things that turned me on to that sound and instrument. What do you use these days?
â€“ When we do our main show, I use two basses. One is still the Rickenbacker, the other one is a â€™63 Fender Jazz

Bass, which is fantastic. Iâ€™m not sure what they call the colour, but itâ€™s like sky blue. Itâ€™s very battered, but I havenâ€™t had anything done to it. But weâ€™ve had a bit of a weight problem, so I sometimes have to bring only one bass, and then I end up using a Duesenberg bass . Itâ€™s very light, and versatile â€“ kind of in the middle. So even though there are practical reasons, itâ€™s great, and it looks nice as well. But the Rickenbacker has more character. Itâ€™s got more of that â€thunkâ€ to it.
SB: What about amps?
â€“ I usually use an Ashdown rig consisting of one 1×15â€ speaker cabinet and one 4×10â€ speaker cab. But because weâ€™re using in-ear â€“ and even if we didnâ€™t, actually, because itâ€™s got nothing to do with it â€“ my bass guitars go directly to the board at the front . Because I use two basses, Iâ€™ve got this unit where thereâ€™s one goes out to the board where I control the sound. Then thereâ€™s one direct injection into the small board, thereâ€™s one with EQ and volume, so I can match up the levels. I use the Fender direct, and the Rickenbacker I add a little treble. And I have to increase the volume a little bit, as well. In the past Iâ€™ve also used Music Man Sting Ray and Trace Elliot amps.
SB: Do you use any effects?
â€“ No, the only effect I can remember using is a wah-wah pedal, and that was on Rubber Bullets.
SB: Did you admire any particular singing bassist when you first started out?
â€“ Of course. The one.
SB: Paul McCartney?
â€“ Yes. I later loved The Police as well. Other great players, who didnâ€™t necessarily sing, are â€“ in some cases, were â€“ John Paul Jones, Jaco Pastorious, and James Jamerson. They all went beyond what most bassists do. They created melodies that enchanced the songs. Some of the bass lines, are, in fact, integral parts of the songs. Thin Lizzyâ€™s Phil Lynott I think was a great singing bassist. Actually, Iâ€™ve got one of his basses: a six-string Fender Jazz bass from 1966. Every guitar Iâ€™ve got, theyâ€™re all working guitars. I never bought anything as an investment, only instruments I can use. One guy Iâ€™m working with, he never lets them out. He has mint condition Stratocasters and Telecasters. I have to force him to use them. I tell him â€itâ€™s not fair, they need to be played. They need the love and warmth of a human body!â€ And they do get better when you use them. Otherwise they go dry, like anything would.
SB: Have your tastes changed over the years regarding bass sounds?
â€“ The sound comes from here (points at fingers) and here (points at heart). I see bands change basses for every song, and I usually canâ€™t hear any difference. Well, you can hear the difference between a Fender with round-wound strings and a Rickenbacker with flat-wound strings. Then you have a real difference in sound. But of course itâ€™s nice visually, to have different instruments. But so much is about how you actually approach the string, and which part of the neck.
SB: Do you switch between fingers and using a pick?
â€“ I play with one finger a lot in the studio. But I always use a pick on stage, probably because I started out as a guitar player. 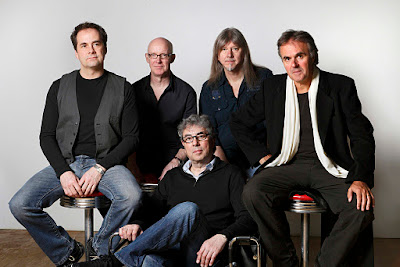 SB: Any other advice for an aspiring bassist ?
â€“ Itâ€™s about playing together with the drummer. The other players can do what they want, the guitarist can fly all over the place, go wrong â€“ do almost anything. But the bass and drums have got to be the foundation. Rock solid, reliable and draw no attention to themselves. But, of course, without us youâ€™d be lost. Another important thing is to look at each other. I played with an amateur band, and the drummer was in his own world. I said â€letâ€™s watch each otherâ€. And he had never thought about that, but itâ€™s so important.