It is a great honor to be named by Bass Guitar Magazine in the UK, as “Website of the Month“, February 2010. I must admit I didn’t see this coming when work started in summer 2009. Many thanks to the interviewees and readers who have continually given their input and feedback. Without their kind contributions there would have been nothing to post at all. 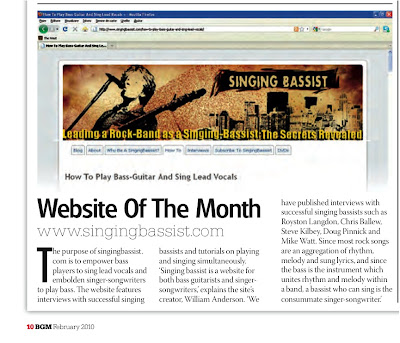 Keep on pluckin’ and singin’,

A walking bass-line consisting of almost only quarter-notes, with relatively easily memorized vocals, Paul McCartney’s All My Loving is a great song to try out when starting to play the bass and sing. I first started by learning the bass-line and striving to play it without looking at the fretboard. But you will see in the band rehearsal video, old habits die hard! I am still looking at the fretboard!! Not to an extent which it hinders my singing.

What does hinder my singing is that I have to sing very loud (almost shouting) in this rehearsal room, because putting the microphone close to my lips causes feedback. We will try a new rehearsal room soon. We will play over a different PA at the concerts. I think this shall miraculously rectify any remaining problems:-)

This is seriously a very simple song to pull together on the bass while vocalizing. If you find yourself tapping your foot to the original recording, then you already know the tempo and structure of the rhythm of the bass-line. If you can tap your toe to that beat and whistle the melody, then you already have 90% of the music knowledge you need to execute this simple syncopation.

The remaining 10% are needed to memorize the (short) lyrics, to sing the vocals less robotically while your fingers must remain robotic on the quarter-notes. But really, its a song which can be acceptably played and sung from the get-go even for the most adamant guitar strummers:-)

In two weeks I will be playing two (cover’s) concerts as a Singing Bassist.
I’m playing with a Singing Guitarist and a Singing Drummer.
In case you happen to be in Switzerland or Southern Germany, flock out in droves please:-)

, is the first singing-bassist autobiography which I’ve encountered in which concrete tips for playing bass and singing are presented. True, like anything Sting has been involved with, the book is fraught with what seem to be fits of exaggeration towards the end of the book. The further one reads, the more haphazard the language becomes. The time-line contracts towards the time in which the Police were active. But the story of his beginnings and the gradual climb to the top is a good read. Here are some of the anecdotes and milestones in his bass-playing and singing career:

“Last Exit” began as a quartett but became a trio, about which Sting writes:

Playing as a trio with Last Exit would prepare me for my subsequent role in the Police. By playing as a trio I would learn the value of space and clarity between musical frequencies, which larger bands can’t help but fill. Being limited to just three instruments helps this learning process, where each as more work to do and more responsibility.

Now we’ve long been aware of the utility of slowing down music recordings in order to deconstruct swift, complicated arrangements. Still, speeding up playback in order to bring bass-lines to the forefront is a technique which Sting’s autobiography seems to introduce to the world. And it was inspiring to read that Sting connected his bass amplifier to a car battery in order to play outdoors. Quite a few lightbulbs went off in my head then. Sting is an articulate writer, be it of lyrics or of prose, and his autobiography is a great read for aspiring singing bassists of any genre.

He can sing as if he were in a very good choir and thatâ€™s how he began his musical journey, singing in the St. Andrewâ€™s church choir, London, when he was young. His clear voice and ability to sing extremely difficult passages reflects those origins. He was musically inspired by the Beatles (and who wasnâ€™t?) and by Paul McCartney to take up the bass.

What was it that made him so good at playing and singing? We can only speculate. We know that we have a bad acid trip to thank for his amazing technique on the bass. He ended up in a hospital and then holed up at his girlfriendâ€™s house wood shedding and developing his unique bass style. By the time he was ready to re-emerge into the world, he was probably able to play extremely well without having to concentrate on it, opening himself up for playing and singing with the best of them. It would appear highly likely that he could already sing at that point and that he was a fan of the vocal groups of the sixties (Simon and Garfunkel, the Byrds, etc).

It may be that by the time he re-emerged into the world that he had the singing/playing gift intact. It may be that his endless practicing got him to the point that he was so good at playing that he did not have to concentrate on it.

He gained a reputation around London with the group Syn and stepped it up a few notches when Yes formed in 1968.

Right from the start, from what we have available to us recording-wise, Squire was incredible at playing hot bass lines while singing beautiful harmonies. Even then he was more than an emerging bass player. He had emerged.

How did he become good at playing and singing? I would hazard a guess, but Iâ€™ll bet Iâ€™m right. If you asked Chris Squire what he did to become a great singing/player, heâ€™d respond like most seasoned pros who say that they just did it. They had to do it or they would not have made it. They play in bands so many nights, so many gigs for so long that they just become good at it. In Chris Squireâ€™s case, I think youâ€™ll agree that he became damn good at it.

Doug Pinnick: It took a while, mathematically, I had to remember what syllable went with which beat. It took me a little while to get used to it. But after that its not a thought any more.

SB: King’s X performs lush vocal arrangements as a trio. Does King’s X occasionally rehearse a capella?
DP: No never. Whichever background vocals are made up by me or by Ty are then, in the studio, prepared by Ty and Jerry together. When it comes time to record their parts, they record them separately. When it comes time to perform live, they learn their parts individually in order to perform them with the instruments.
SB: Do you record at home sometimes?
DP: I record all my demos at home, as well as my first three solo-records I recorded at home too. I have a full-blown home studio. I have a drum-room which I built in my garage, and a separate room with all my recording equipment in it. I have also brought people in to record.
SB: And finally, any general recommendations for musicians who want to play bass and sing?
DP: Practice makes perfect. I know that a lot of people say that they can’t sing and play bass, but you can learn anything if you just sit down and try, don’t give up. It will be difficult at first. You will feel like you can’t do it. But if you keep trying, the next thing you know, it will be second nature.