The Guitar-Strumming Singer-Songwriter often merely needs to strum a few standard chords which accompany his or her vocal-melody in order to proclaim the birth of a new song. Guitars, and especially Acoustic Guitars, are lovely chordal instruments, supplying six notes with each and every upstroke (and with each downstroke). In some ways, the six-stringed guitar simulates an entire band in and of itself, the strumming pattern supplying percussion, the deeper three strings providing the emotive bass-frequencies, and the higher three strings accompanying the vocal melodies. Writing demos for a band on an acoustic guitar is a logical choice, because the strumming pattern plus vocal melody sets out the parts for all of the band members. In more ways, songwriting with an acoustic guitar is TOO easy.

The songwriting singing-bassist must endure longer journeys in birthing new song. Donning the cape labeled “Vocalist”, he or she begins a song with a rhyme or poem set to melody. Maybe this melody is accompanied by a chordal instrument such as a piano or a six-stringed guitar during the first months after conception. Donning the bassist hat, the chordal accompaniment is filled-in or adorned with an expressive bass-line that must simulate and even replace the chords with an ornate string of single notes. And wait, low and behold, this concatenation of single notes must in some way fit with the often frenetic participation of a drummer!

Once the bass-line is invented, the two sometimes contrapuntal, often completely dissociate compositions for the Vocals and for the Bass-Guitar must be united for the end-product of the singing-bassist, which is the schizophrenic “song and dance” of performing a completed song. One quickly sees that the gestation period for a song written by a singing-bassist is necessarily longer than that for a song written by a singing-guitarist. However, the singing-bassist probably acknowledges and embraces this fact, much in the same way certain connoisseurs prefer aged wine to recent swill, or home-cooking to fast-food. A slow brew ensures a deep character.

It must be mentioned that certain singing-bassists elect to outsource the authoring of vocals.

In these band formations one quickly perceives that the songwriter views himself primarily as a composer and performer. Possibly the topic of the song’s text is mutually agreed upon between lyricist and vocalist, but then the singing-bassist is tasked with weaving his bass-work together with the work of his lyricist (and furthermore with the drummer of his band).

The case-study of Rush could become a doctoral thesis about the consummate singing-bassist, and not in the least because of the fact that it is the drummer who authors the lyrics for the singing-bassist. Does Neil Peart strive for creating non-intuitive vocal rhythms to propel Geddy Lee to ever-increasing feats of musical coordination? Many open questions for interviews….. In any case we are overwhelmed with the impression that Rush always strives to “keep it in the family“.

Returning back to the point of this post, I speculate that songwriting for singing-bassists is more time-consuming because of the fact that it is more all-encompassing.

The autobiography of Suzi Quatro, the first female Rock Singing-Bassist. This fine read is entitled Unzipped

and it details her rise from suburban Detroit to commanding the stages as a Singing-Bassist around the world. She is very representative of a time when playback was non-existent, and when instrumental virtuosity was a paramount feature in the career of every musician. I zone out watching her performances on youtube wondering where all those notes came from and then realizing that they all emanate from that 5’1″ girl in the leather jump suit with a bass-guitar looking too big for her frame! To my knowledge she was also the first Singing-Bassist as a solo-act. Meaning, although she most likely could have recruited a bass-guitarist to perform for/with her, she opted to keep playing and singing.

I read this book as a source of general research on singing bassism, and found the following anecdotes of particular relevance:

is a fascinating account of how a normal suburban girl-next-door becomes a bass-guitar playing band-leader, owning the songs, owning the stage, owning her crowd. Suzi opened the door for instrument-playing rocker-girls, and did that all the while playing the bass and singing, bravo!

This post is a compilation of all of the Autobiographies or semi- Autobiographies from which one can glean some goods on “how they do it”, they being, the expert Singing Bassists:

The reader will see how much of a “non-issue” the topic of singing-bassism is for these autobiographers. They really don’t see it as a topic of interest to their readers. But then again, the remainder of their lives has been quite fascinating, so its a difficult choice of priorities. We are indeed a small niche who are fascinated by the singing-bassist aspects!

In a typical pop-rock band,

the singer and guitarist collaborate closely, and

the bassist and the drummer collaborate closely.

The guitarist and the singer take turns coming to the fore in the performance. For example, it is rare that a guitar solo is played during the singing of the verse. Classic pop-rock bassistry dictates that the bass-guitar and the drummer operate together, that the drummer’s kick drum and the bassist’s notes are together. The green lines in the following diagrams indicate which players are “best-friends”, indicative of the most intense collaboration. Here is the situation in a classic meat-and-potatoes four-piece band: 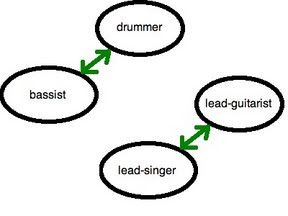 We see that there are essentially two autonomous bands operating within the four-piece band. One of these sub-bands is called “the rhythm section”, and consists of the bassist and the drummer. The other sub-band are the self-anointed “leads”, the “lead-singer” and the “lead-guitarist”. Notice that the songwriters could be hidden behind any of these performance monikers.

The Irish Rock Band U2 is a classic example of the four-piece “lead-singer and lead-guitarist” band.
The self-anointment among the “lead” section of U2 is accentuated by the fact that only the singer and the guitarists have pseudonyms (“Bono” and “Edge”), which attempt to amplify the mythology surrounding their personae. The rhythm-section retain their birth-names, which make them the more accessible, less glorified sub-band within U2. This duality has its advantages for the band, namely, that fans can find both idols and normal people in the same band. But the songwriting is vaguer and less unified, because there are in fact two bands playing on the stage!

The cohesion of a guitarist-led trio is just as shaky as that of a conventional four-piece band, and the band must struggle to “fill in the (acoustical) gaps” because the same person must sing lead and play lead guitar. It is difficult for the fans to consider the band as a unit, because the most obvious impression is that of “the singing-guitar-wizard and his loyal drum’n’bass-minions”. Guitarist-led trios often opt to perform with a fourth musician on “rhythm guitar” or keys.

The bassist-fronted three-piece leaves no ambiguity as to who is in the driver’s seat. The bass-guitarist unifies the drummer with the singer and with the guitarist. The singer collaborates with the guitarist.
For the songwriter, the role of singing-bassist affords the maximum in unison and cohesion in performance.

The singing-bassist has larger control over the band’s performance than does any other member of his band or any member of any other band-configuration.

You can’t argue with a bass-guitar

An element of serendipity also exists which gravitates the roles of songwriter and singing-bassist together. Often, a songwriter inherits the bass-guitar, due to either the exile or resignation of the band’s prior bass-guitarist. However, emerging songwriters can opt to form stronger, more highly-cohesive bands, by performing as Singing-Bassists.

One remaining good reason for a songwriter to play bass and sing is that of accelerated band formation. A quick glance in the want-ads will reveal a surplus of guitarists. A songwriter who sings and performs on the bass-guitar only needs two further musicians to form a road-ready band.

Have you now been convinced to become a Singing Bassist? Then Sign Up here to receive tips on how to do it!

Here are some excerpts from conversations I have had with singing bassists concerning the reasons they like to play bass and sing:

My choosing the bass was driven by the desire to convey my song ideas to the band.
The frequency and the sound of the bass are so important, its such an emotive frequency, the low-end, without people even being aware of it.
I love the bass-guitar as an instrument…. because I always think of all the parts in a piece of music. Its all happening at the same time for me….its quite a natural (choice of instrument).
-Royston Langdon, Singing-Bassist of Spacehog

Being a singing songwriting bass player is definitely a good place to get in the band, especially if you have some ideas that you want to impose on some other players, … its quite a position of power.
-Steve Kilbey, Singing-Bassist of The Church

Chris Ballew, Singing-Bassist from the Presidents of the United States of America, offers the following answers:

Equipment
These are mentioned as pre-requisites. Any functioning electric bass-guitar will do for playing bass while singing.

Experience
Singingbassist.com is the baby of a songwriter with one album in the can, and who has played several concerts as a Singing-Bassist. SB has also played many concerts as a bassist in a four-piece band rock-band in Germany.

The methods detailed on this website are intended for musically autonomous instrumentalists who can sing. It is assumed that the reader can obtain his/her music by ear or by notes.